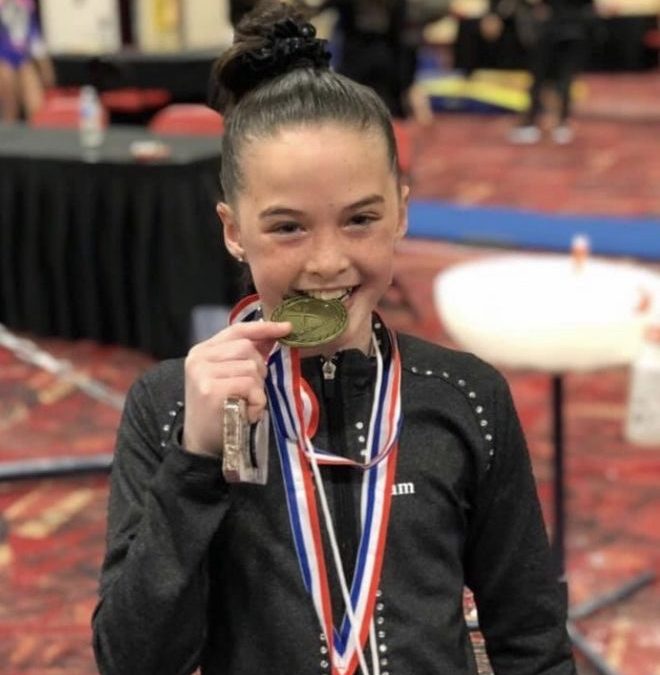 Olympica Gymnastics took on Regional Championships with some of the best competitors from California, Utah, Nevada, and Arizona. Our Level 8-10s competed in Las Vegas, Nevada on April 12th-14th.

Samantha Hayes was crowned Level 8 REGIONAL CHAMPION on Floor with a 9.60! Julia Rojas earned the title of LEVEL 8 REGIONAL BAR CHAMPION with a 9.625! She also took home the bronze medal on Beam with a 9.475!

Level 8, Kaitlyn Driessen, competed for the prestigious TEAM SOCAL and finished with a huge all-around score of  38.10!  The team finished 2nd overall among some tough competition!

Our Level 6/7’s traveled to Reno, Nevada on April 26th-28th to compete in their own Region 1 Champs.  Kylie Phillips was crowned LEVEL 6 REGIONAL ALL-AROUND CHAMPION (38.1) and also won the Regional Title on Floor with a score of 9.775! Audrey Jackson was the Silver Medalist on Beam (9.725) and AA (37.875)!  All of our competitors finished with medals and personal bests!

We are so proud of all your hard work from the beginning of a long and competitive 2019 season. Great job, girls! You’ve truly outdone yourselves!

“Olympica’s Level 8, 9, and 10 gymnasts traveled to Las Vegas, Nevada, the weekend of April 12-14 to compete in the Region 1 Gymnastics Championships at the South Point Hotel.  Region 1 consists of the top gymnasts from California, Nevada, Arizona, and Utah.

Level 8 gymnast, Julia Rojas of San Clemente, earned the Regional Bars Champion title, scoring 9.675 in the Child I division. She is also the bronze medalist on beam with a score of 9.475.  Julia also placed fourth on floor with a 9.500. Teammate Samantha Hayes of Ladera Ranch is the Region 1 Floor Champion, scoring a season-high 9.600. She also placed fourth on bars with a 9.275, competing in the Child A division.

Additionally, Level 8 gymnast, Kaitlyn Driessen, had the privilege of competing as a member of the So Cal State Team.  She was one of only twelve girls selected from all Level 8 age divisions to represent southern California. She scored 9.475 or higher on all four events and finished with a 38.100 All Around!  This past weekend, the Level 6 and 7 gymnasts traveled to Reno, Nevada for their Region 1 Championships at the Nugget Casino Resort. Kylie Phillips of Laguna Niguel is the Level 6 Regional Floor and All-Around Champion! She scored a season-high 9.775 on floor and 38.10 in the All Around. She also took fourth place on vault (9.325) and bars (9.500) and fifth place on beam (9.500), competing in the Child D division.

Audrey Jackson, also of Laguna Niguel, took home a pair of silver medals earning an impressive 9.725 on beam and a 37.825 All Around. She also earned fourth place on floor (9.650) and fifth place on vault (9.175), competing in the Level 6 Child C division. Also in Level 6, Addison Malue of Mission Viejo, placed fourth on beam with a 9.500 and fifth on vault with a 9.375 in the Junior C division. Kirra Schmitt of San Clemente took home fourth place on floor with a 9.625 in the Child K division.

Olympica’s Level 7 gymnasts, Cameron Craycraft placed fourth on vault with a 9.175, and Abby Quan placed fifth on floor with a 9.425. These ladies have trained countless hours in the gym, and their hard work, dedication, and determination throughout the season is to be commended.  Congratulations to all of the gymnasts and coaches at Olympica Gymnastics Academy!”